Posted by admin on Wednesday, 30 March 2022 in Quotes
Tweet

“I learned all about life with a ball at my feet.” 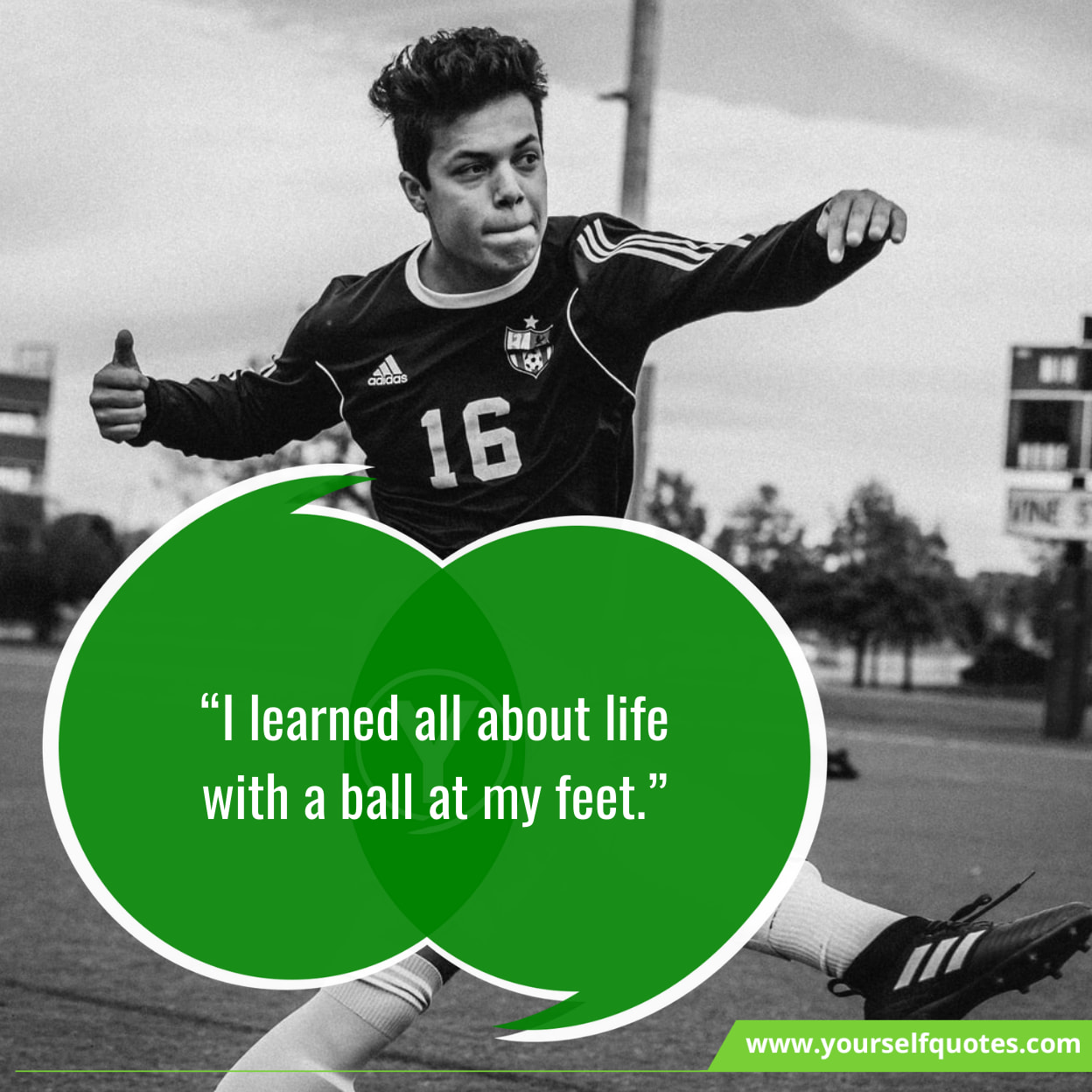 “There is no pressure when you are making a dream come true.” ― Neymar

“In football, the worst things are excuses. Excuses mean you cannot grow or move forward.”

“There are people for whom Rangers Football Club is their entire way of life.” ― Walter Smith

“For every pass, I caught in a game, I caught a thousand in practice.” ― Don Hutson

“The most valuable player is the one who makes the most players valuable.”

“If your dream ain’t bigger than you, there’s a problem with your dream.”

“Football is easy if you’re crazy as hell.”

“Nobody who ever gave his best regretted it.” ― George Halas

“Loyalty is a big part of football, and it shows if you are a real man or not.”

“You have to fight to reach your dream. You have to sacrifice and work hard for it.” ― Lionel Messi 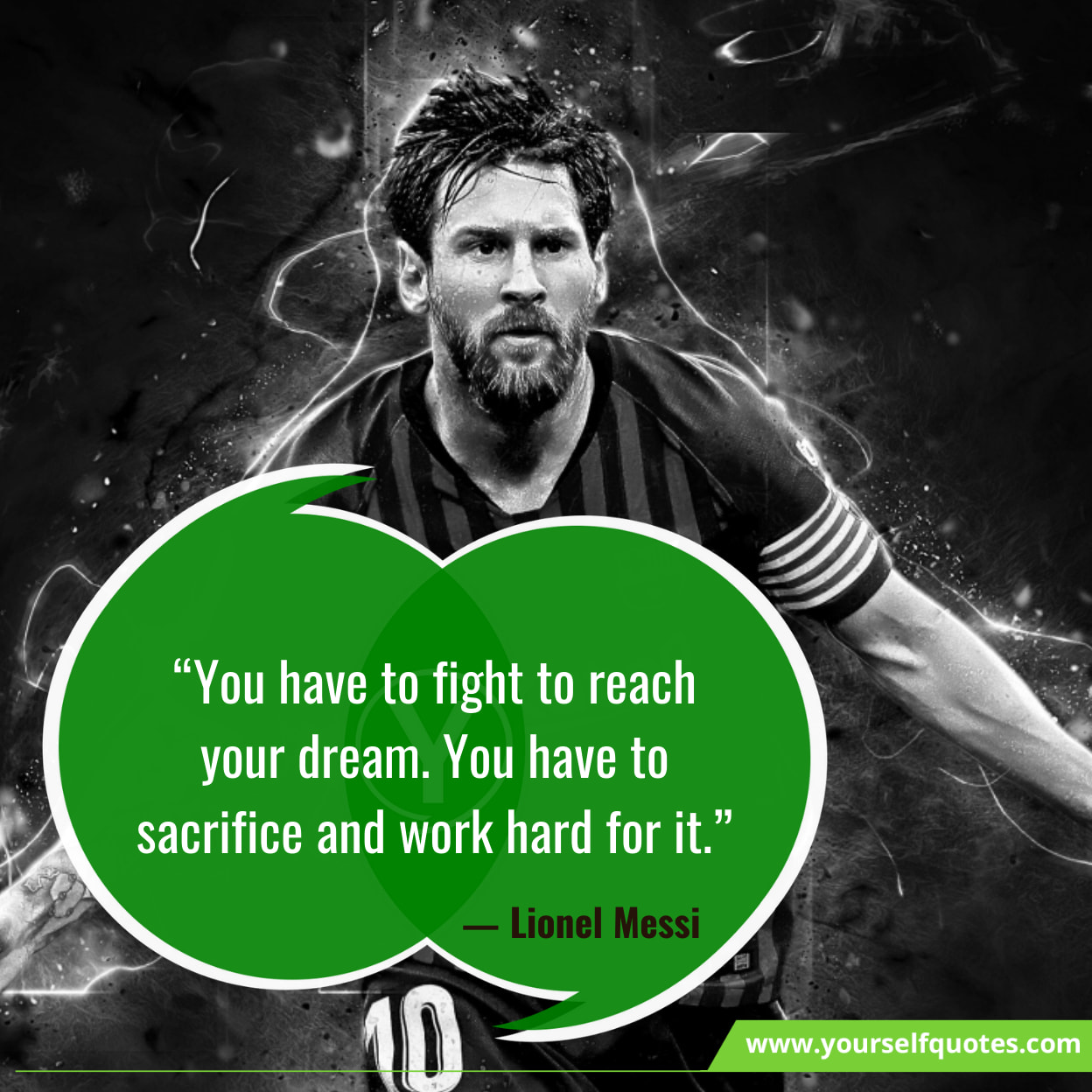 “Football is a fertility festival. Eleven sperm trying to get into the egg. I feel sorry for the goalkeeper.”

“We would accomplish many more things if we did not think of them as impossible.”

“I don’t have time for hobbies. At the end of the day, I treat my job as a hobby. It’s something I love doing.” ― David Beckham

“In football, everything is possible, from the moment you work and you believe in your qualities.” ― Kylian Mbappe

“Football is great because you always have another opportunity to change history.”

“When people succeed, it is because of hard work. Luck has nothing to do with success.” ― Diego Maradona

“Winning is not everything … but making the effort to win is.”

“The first 90 minutes are the most important.” ― Bobby Robson

“The more difficult the victory, the greater the happiness in winning.” ― Pelé 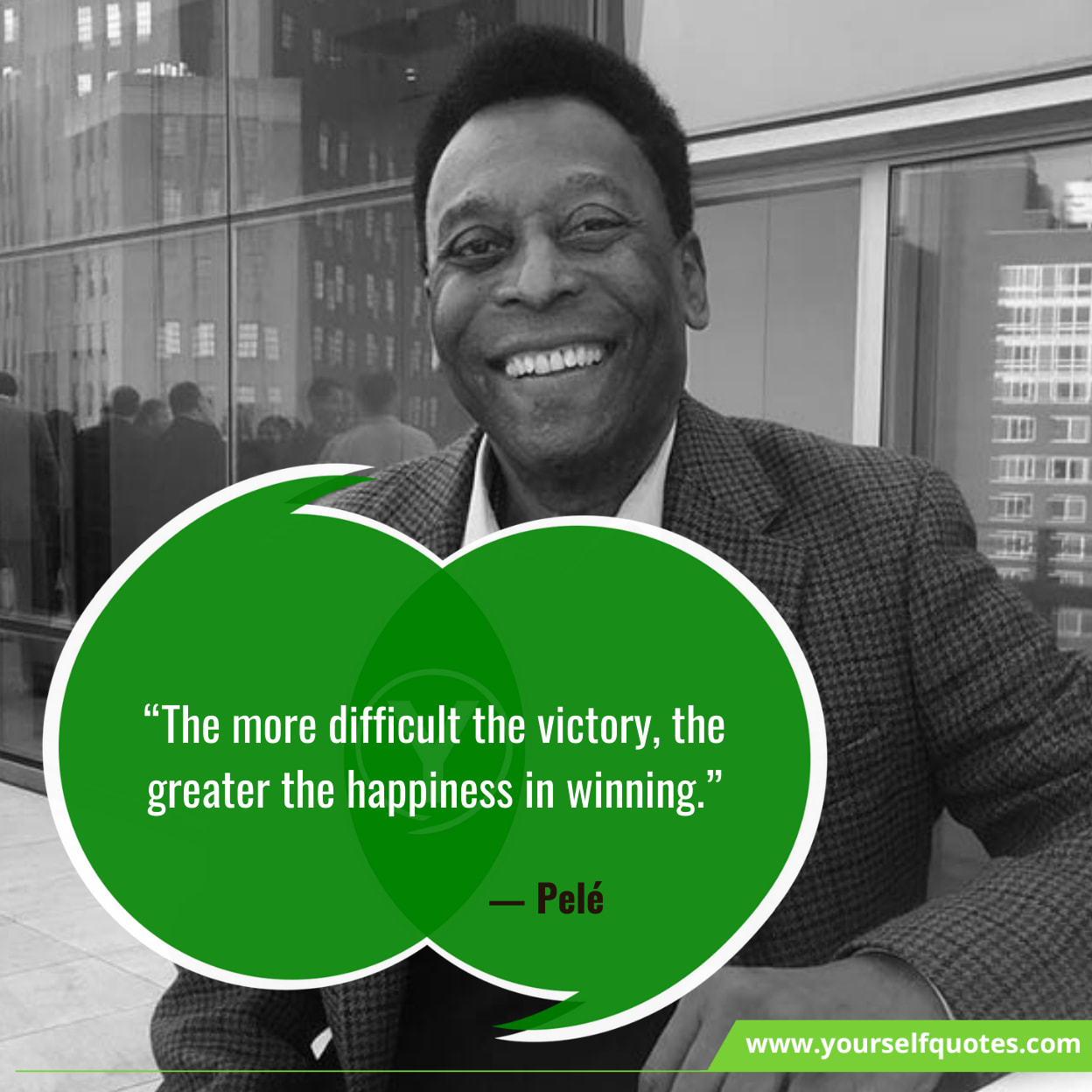 “I just hate losing, and that gives you an extra determination to work harder.” ― Wayne Rooney

“It’s so easy for a kid to join a gang, to do drugs… we should make it that easy to be involved in football and academics.”

“I once cried because I had no shoes to play soccer, but one day, I met a man who had no feet.” ― Zinedine Zidane

“We don’t want our players to be monks. We want them to be better football players because a monk does not play football at this level.”

“I couldn’t be more chuffed if I was a badger at the start of mating season.” ― Ian Holloway

“If you eat caviar every day it is difficult to return to sausages.” ― Arsene Wenger

“Set your goals high, and don’t stop till you get there.”

“Football is about sacrifice, dedication, a lot of work, and friendship off the pitch.”

“Without football, my life is worth nothing.” ― Cristiano Ronaldo 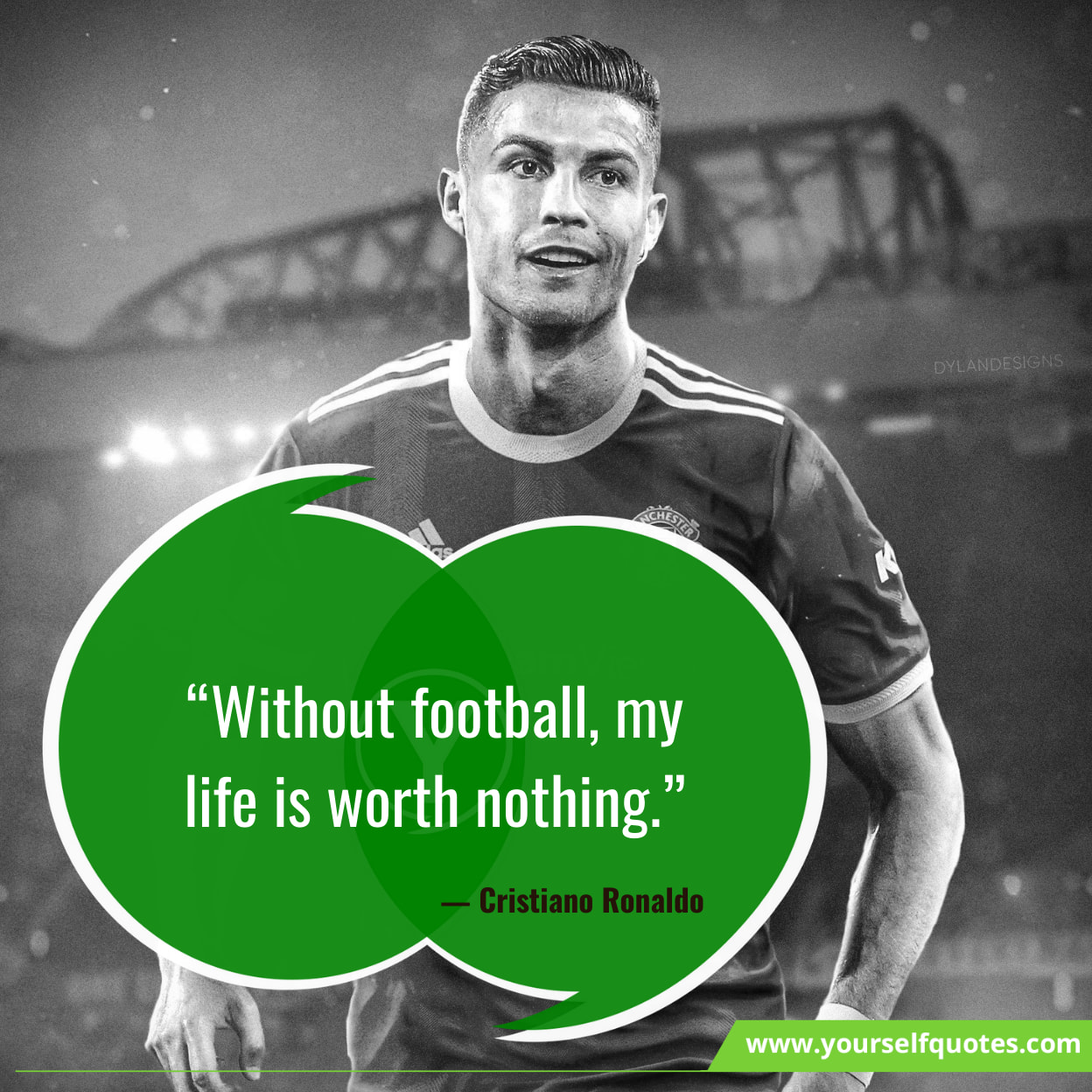 “Some people think football is a matter of life and death. I assure you, it’s much more serious than that.”

“You have to perform at a consistently higher level than others. That’s the mark of a true professional.” ― Joe Paterno

“Success isn’t measured by money or power or social rank. Success is measured by your discipline and inner peace.” ― Mike Ditka

“Ability is what you’re capable of doing. Motivation determines what you do. Attitude determines how well you do it.”

“Pressure is something you feel when you don’t know what the hell you’re doing.”

“You fail all the time. But you aren’t a failure until you start blaming someone else.”

“Some people think football is a matter of life and death. I assure you, it’s much more serious than that.”

“Football is a simple game. Twenty-two men chase a ball for 90 minutes and at the end, the Germans always win.”

“Football is a game you cannot play without making mistakes.”

“I am not a superstar or an ego. I am just the same as I always was: Someone who plays football.”

“In football, you can win or lose. We always have to be together, with the same spirit we’ve always had.”

“Gentlemen, it is better to have died as a small boy than to fumble this football.”

“When you don’t give up, you cannot fail.”

“I may win and I may lose, but I will never be defeated.”

“There is only one way to succeed in anything…and that is to give it everything.”

“You cannot make progress with excuses.”

“It is my conviction that here are no limits to learning, and that it can never stop, no matter what our age.”

“Scoring goals is a great feeling, but the most important thing to me is that the team is successful.”

“Football is the most important of the less important things in the world.” ― Neymar 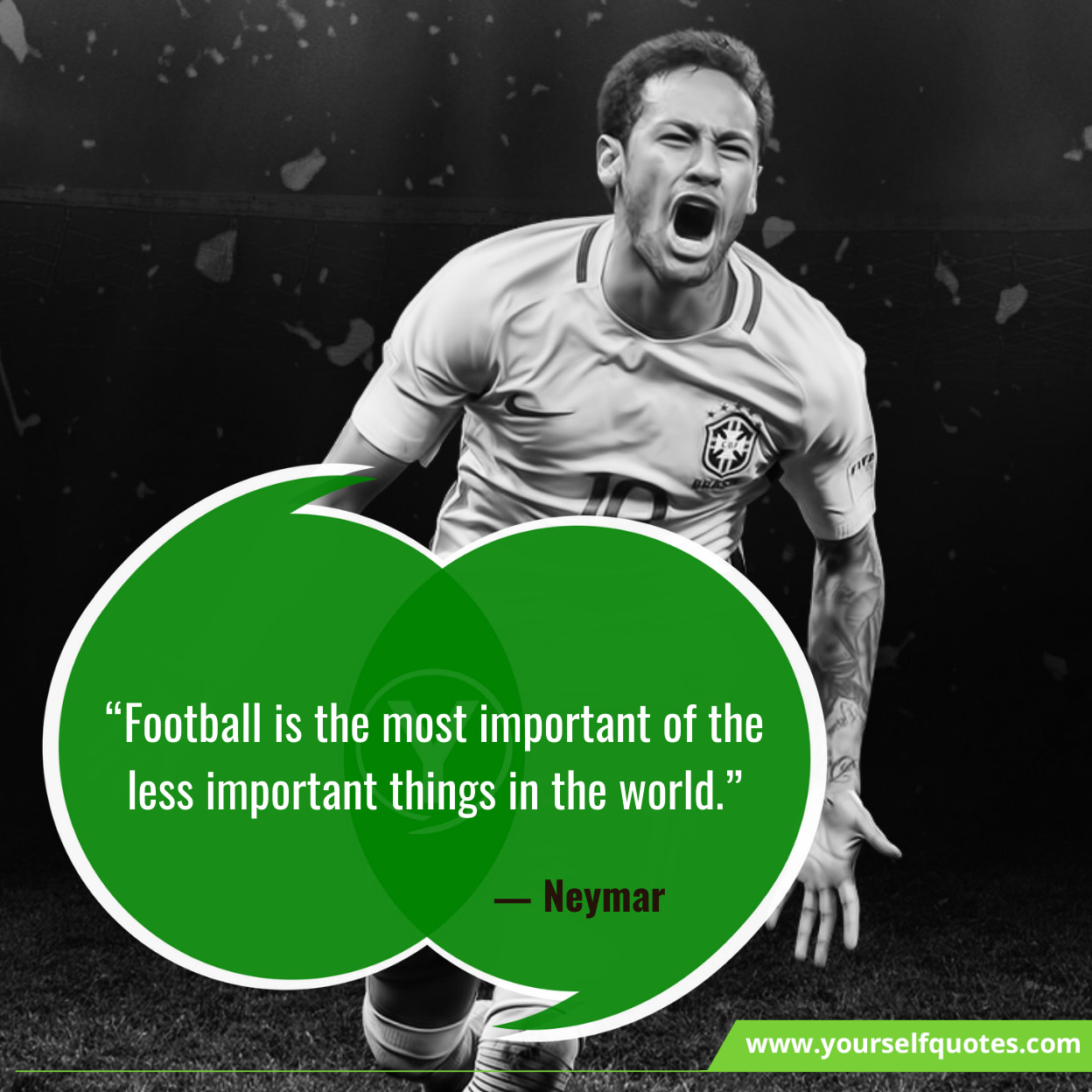 Which are your favorite Football Quotes? Leave a comment below.